A survey of GPs by the National Institute for Health Research Applied Research Collaboration West (NIHR ARC West) at the University of Bristol has found wide variation in which lab tests GPs say they would order for patients with chronic conditions. This variation could be because of a lack of evidence on optimal testing for chronic conditions, so guidelines are unclear and incomplete.

The survey’s findings, published in BMC Family Practice, showed that GPs make decisions about testing based on different reasons. Uncertainty around when, and how often, to test patients could lead to some GPs ordering too many tests than is recommended, whereas others may order too few.

Around half of all tests ordered by GP practices are to monitor long-term conditions such as high blood pressure, diabetes and chronic kidney disease. While it is important that tests are carried out, if results are abnormal, further tests or referrals might be needed to find out what is wrong. This can be worrying for patients, and sometimes doctors may never find a cause for an abnormal blood test. Unnecessary testing can also lead to over-diagnosis, where a condition is diagnosed that would never have caused problems during a patient’s lifetime.

Between October and November 2019, GPs were surveyed to understand their perspectives on using tests for monitoring long-term conditions, the workload involved in testing, and their confidence in ordering and interpreting tests results. They completed an online survey consisting of multiple-choice and open-ended questions that was promoted on social media and in newsletters targeting GPs practising in UK. The results were analysed using a mixed-methods approach.

Of the 550 GPs who completed the survey, 69 per cent had more than 10 years’ experience. More than three quarters of respondents said they spent more than 30 minutes per day on testing (78 per cent), but only half said they felt confident in dealing with abnormal results (53 per cent). There was a high level of disagreement for whether liver function tests and full blood counts should be done ‘routinely’, ‘sometimes’, or ‘never’ in patients with a certain long-term condition.

Respondents’ comments to the survey’s open-ended questions recognised that testing unnecessarily could have negative consequences, including increased workload and potential for patient harm. They noted the different pressures that lead to over-testing, for example: workload from secondary care, fear of missing something, and patient expectations. Their uncertainties stemmed from a lack of evidence about the benefits of testing and unclear guidelines.

“Uncertainties surrounding optimal testing has resulted in an over-use of tests, which leads to a waste of resources, increased GP workload and potential patient harm. These results confirm the variation between practices and regions that has been observed from looking at test ordering data.

“We know that GPs’ workloads are also affected by unnecessary testing, as the results need to be reviewed and abnormal results must be investigated. But the lack of confidence reported in knowing how to act on abnormal test results underlines the urgent need for robust evidence on optimal testing and the development of clear and unambiguous testing recommendations.” 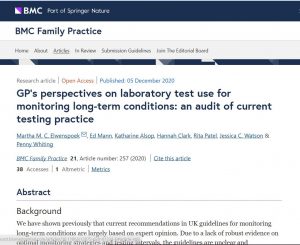 GP’s perspectives on laboratory test use for monitoring long-term conditions: an audit of current testing practice

Laboratory tests are on the rise in UK healthcare. Half of the tests ordered by GP practices are to monitor long-term conditions such as high…