Lessons on integration from a respiratory service

A study looking at the integration of a respiratory service for patients with chronic obstructive pulmonary disease (COPD) has highlighted how integration of such services could be improved in the future.

COPD is a chronic lung disease most often caused by smoking and is the fifth most common cause of death in the UK. Many patients with COPD have sudden flare-ups that can happen repeatedly and are often caused by a lung infection that needs immediate treatment.

Developing integrated care pathways is central to the NHS Long Term Plan, but the evidence for such integration in respiratory care has been mixed.

The integrated service investigated in the NIHR ARC West study was first set up in 2016 and brought together respiratory professionals from both an acute hospital trust and a community care provider. The research team explored whether the service reduced hospital admissions and readmissions for COPD patients and the length of their hospital stays, using data from the service and comparison regions. The data covered December 2014 to November 2017, covering two years before and after the service was launched. Between May 2018 and May 2019 the team also interviewed the professionals delivering it to understand their experiences of the new integrated service.

The researchers found little evidence that the service changed the rate of emergency hospital admissions, 30-day readmissions, or length of stay. Admissions had a seasonal pattern, varying between 180 and 330 per 10,000 COPD patients, and were higher during the winter months. The average length of stay was around five days and did not change much over the study period. Around one in 10 COPD patients were back in hospital within 30 days of their first stay.

Our interview study found that, generally, hospital and community staff liked the idea of working together but also identified areas where the partner organisations struggled to integrate, including:

The interview data did suggest an association between lack of integration and the commissioning process (the way in which the contract between the two organisations was drawn up). The research team propose that future initiatives like this should establish a dialogue and understanding between the partner organisations before the contract is put in place. This would mean the role of each organisation would be clearer before they started working together, allowing relationships to develop and for both organisations to feel involved from the start. This should lead to higher levels of trust and confidence.

“Our study adds to the evidence that integration is challenging to get right. The data element of our study found the new service didn’t have the hoped for impact of reducing hospital admissions, though we don’t know whether this would improve over time as the service beds in and the partners get more used to working together.

“While the staff involved liked the idea of working together in principle, we found many examples of things that could have gone better. Communication and trust were especially important, so we feel that commissioners need to involve all the partners in new service integrations as early as possible. This will help build trust, give clarity on who does what and open lines of communication.”

“These two complementary studies provide much needed objective evaluation and robust learning about the real-world experience of developing integrated respiratory services. The findings are particularly timely and important as they are of direct relevance to policy makers and commissioners who are looking to deliver improvements in outcomes for patients living with respiratory disease – a key priority for the NHS Long Term Plan.” 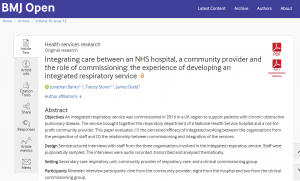 Integrating care between an NHS hospital, a community provider and the role of commissioning: the experience of developing an integrated respiratory service 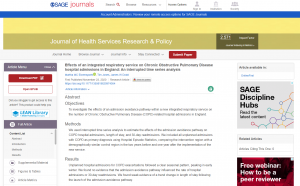 A community health care provider is working with a specialist hospital team to support patients with respiratory disease. The aim is to provide more respiratory…