Previous research has shown PrEP is safe and effective in reducing the risk of HIV infection. The increased use of PrEP is likely to have played a part in the dramatic decline in new HIV diagnoses in the UK among men who have sex with men. PrEP may lead people to have more unprotected sex, which can lead to an increase in other STIs. People taking PrEP should have regular health checks, including tests for sexual infections. They are encouraged to attend sexual health checks every three months.

The frequency in which both groups tested for HIV and STIs increased between 2016-2019. In 2016, each patient had an average of 1.5 STI tests a year, while in 2019 this was 2.1. The likelihood of an STI being diagnosed per test also increased across all populations, including among individuals who were recorded to have only partners of the opposite sex. The increase in diagnoses was most significant in bisexual men, which could lead to a rise in STIs in cisgender women.

Louis Macgregor, Senior Research Associate at the University of Bristol and the paper’s lead author, said:

“The challenge is how we approach balancing HIV risk and sexual pleasure with the competing risks of STIs and antimicrobial resistance. The full interplay of increased testing, increasing PrEP use and behavioural changes is difficult to determine.”

“We now face the challenge and privilege of addressing sexual health messaging in an era of reduced HIV anxiety and fear.” 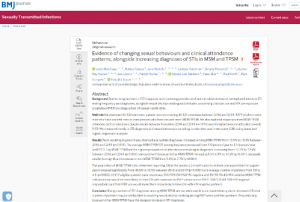 Evidence of changing sexual behaviours and clinical attendance patterns, alongside increasing diagnoses of STIs in MSM and TPSM

PrEP is a medicine which research shows is safe and effective in reducing the risk of HIV infection. The increase in its use is likely…