A programme to increase the use of magnesium sulfate, a £1 injection that helps prevent cerebral palsy in premature babies, is effective according to a National Institute for Health and Care Research (NIHR) funded evaluation. The findings, led by researchers at the University of Bristol, are published in the Archives of Disease in Childhood.

Premature birth is the main cause of brain injury and cerebral palsy in babies. Evidence shows that babies can be protected from brain injury by giving magnesium sulfate to women who are at risk of premature birth. This reduces the risk of cerebral palsy by a third. However, in 2017 only 64% of eligible women were being given magnesium sulfate in England, Scotland and Wales.

The prevention of cerebral palsy in pre-term labour (PReCePT) programme aimed to support all maternity units in England to increase the use of magnesium sulfate in premature births. The PReCePT approach was developed in the West of England in 2014. It was led by the West of England Academic Health Science Network (AHSN) and University Hospitals Bristol and Weston NHS Foundation Trust.

It was then piloted in five NHS trusts in the West of England, and this pilot was evaluated by the NIHR Applied Research Collaboration West (NIHR ARC West). It has since been rolled out across England via the AHSN Network as a national programme.

The evaluation of the national programme, also led by NIHR ARC West, found that PReCePT was both effective and cost-effective. The researchers looked at data from the UK National Neonatal Research Database for the year before and year after PReCePT was implemented in maternity units in England.

While use of magnesium sulfate had been increasing before, the study showed that PReCePT was able to accelerate uptake. It increased by 6.3 percentage points on average across all maternity units in England during the first year, over and above the increase that would be expected over time as the practice spread organically. After also adjusting for variations in when maternity units started the programme, the increase in use of magnesium sulfate was 9.5 percentage points. By May 2020, on average 86.4% of eligible mothers were receiving magnesium sulfate.

In the five West of England pilot sites the improved use of magnesium sulfate has been sustained over the years since PReCePT was implemented. As the programme costs were mostly in the first year of implementation, longer-term national analysis may show that PReCePT is even more cost-effective over a longer period.

John Macleod, NIHR ARC West Director, Professor in Clinical Epidemiology and Primary Care at the University of Bristol and principal investigator of the evaluation, said:

“Our in-depth analysis has been able to demonstrate that the PReCePT programme is both effective and cost-effective. The programme has increased uptake of magnesium sulfate, which we know is a cost-effective medicine to prevent cerebral palsy, much more quickly than we could have otherwise expected.

“We are pleased to have played a part in helping get this cheap yet effective treatment to more babies.”

Natasha Swinscoe, Chief Executive for the West of England AHSN and National Lead for Patient Safety for the AHSN Network, said:

“We’ve been delighted to support the development of PReCePT from its inception at University Hospitals Bristol and Weston to its spread to all five hospital trusts in the West of England, and then leading the national rollout through the AHSN Network.

“We are incredibly proud of what the perinatal community has achieved through this programme, and the difference it is making to the lives of so many premature babies and their families.”

This evaluation is part of a long-term collaboration between PReCePT’s chief investigator Professor Karen Luyt, NIHR ARC West and the West of England AHSN on the use of magnesium sulfate to prevent cerebral palsy in premature babies.

Karen Luyt, Professor in Neonatal Medicine at the University of Bristol, said:

“This important study shows the impact of taking a promising intervention that had been shown to work in a research setting and scaling it up across the country. Giving magnesium sulfate to prevent cerebral palsy in premature babies is a simple, inexpensive intervention that can make such a difference to families and the health service. We look forward to seeing ongoing use of magnesium sulfate across our maternity units so that these benefits continue.”

Minister of State for Health Will Quince said:

“This study proves this simple, cost effective injection can protect babies as well as potentially saving society up to £3 million. Thanks to our leading research in this space, this has already been rolled out nationally and it is vital all eligible women are offered magnesium sulfate.

“It’s so important to progress research in areas like this and I encourage researchers with innovative ideas to apply for funding through the National Institute for Health and Care Research.

“More widely, I am committed to ensuring all people living with cerebral palsy can fulfil their potential throughout their life – that’s why we’ve set out principles to guide the transition of young people with cerebral palsy into adulthood in health, social care and education systems.” 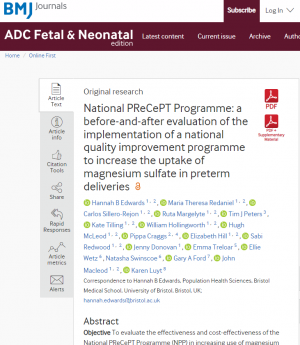 National PReCePT Programme: a before-and-after evaluation of the implementation of a national quality improvement programme to increase the uptake of magnesium sulfate in preterm deliveries

Premature birth is the main cause of brain injury and cerebral palsy in babies. Evidence shows that babies can be protected from brain injury by… 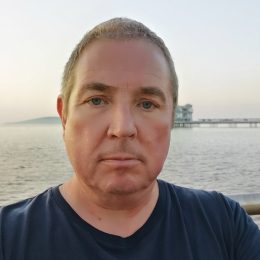