A substantial proportion of people felt that they had become more involved in neighbourhood life following the lockdown, according to findings from the Apart but not Alone study. The researchers, whose results were published in Emerald Open Research, also found that people were interested in becoming more involved in neighbourhood life post-lockdown.

The findings were based on responses from 539 people living in the Bristol Built-Up Area who took part in an online survey from 6-20 April 2020. This was between weeks three and four of the UK Government’s coronavirus stay-at-home restrictions (COVID-19 lockdown).

Respondents reported providing a wide range of support during this early stage of lockdown that went beyond health information, food and medical prescription assistance, to include raising morale through humour, creativity and acts of kindness and solidarity. This informal neighbour support was more expansive and organised more rapidly than the services available through formal voluntary channels such as the NHS Volunteer Responders scheme.

“Lockdown seemed to have provided that opportunity or nudge for people who don’t usually get involved in their neighbourhood to get involved. It was great to read so many stories of how neighbours were coming together and supporting one another creatively. It was particularly heartening that older people were offering support as well, despite being classed as vulnerable.”

Respondents used a variety of approaches to communicate with neighbours, with a majority using social media platforms to become involved in extended networks. Although greater efforts were made to contact vulnerable groups, the biggest challenge reported was reaching the most vulnerable or reaching out effectively.

Compared to respondents living in less deprived areas, those from more deprived areas were more likely to report that they were involved in supporting certain vulnerable groups, including people with financial issues, people with disabilities or reduced mobility, and people living in homes with no outdoor space. The findings are in line with previous research on major social upheavals and suggest that responses to the COVID-19 pandemic and associated social restrictions may increase existing social and health inequalities.

In response to this, Michele Biddle said:

“Further research is needed to explore the inequalities caused or increased by COVID-19, not only in terms of deprivation, but also with regards to gender and ethnicity. For example, 80.9% of respondents were female – is this because women were shouldering the bulk of the burden to care for their neighbours as well as their family?”

The Apart but not Alone study continues with in-depth interviews with some survey respondents to better understand the lived experiences of lockdown, and a follow-on survey focused on neighbour support following the easing of UK lockdown restrictions. 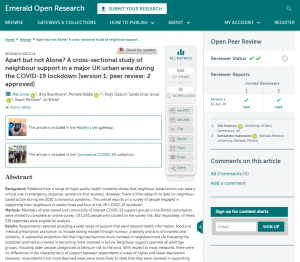 Apart but not Alone: neighbour support in the Bristol area during the COVID-19 lockdown

Across the world, government-mandated lockdowns in response to the COVID-19 pandemic have led to a rise in community action in neighbourhoods. Although evidence shows that…