Apart but not Alone: neighbour support in the Bristol area during the COVID-19 lockdown

Across the world, government-mandated lockdowns in response to the COVID-19 pandemic have led to a rise in community action in neighbourhoods.

Although evidence shows that action and support from the local community can play a key role during an emergency, it also shows that the COVID-19 pandemic, and the wider response from governments and societies, disproportionately affect some social groups.

The Apart but not Alone study aimed to understand how neighbours were supporting each other during the UK COVID-19 lockdown. It also explored how different neighbourhoods’ social and economic status affected local people’s need for support and the type of support given.

This rapid study covered the ‘Bristol Built-Up Area’ as defined by the Office for National Statistics (ONS). This area is made up of all the local government area of the city of Bristol, most of South Gloucestershire and an urban fringe of North Somerset.

To get around the problems of office closures and the risk of coronavirus transmission, we developed an online survey. The survey was intended to be completed by adults who described themselves as being involved in neighbour support.

The survey took place between weeks three and four of the UK Government’s coronavirus stay-at-home restrictions (COVID-19 lockdown), from 6-20 April 2020. It was promoted through several channels including:

Of the 862 people who responded to the survey, a total of 539 responses were eligible for analysis.

Public contributors from People in Health West of England (PHWE), and Bristol Ageing Better (BAB) Community Researchers were part of the public involvement group for this study. This group contributed to the development of the online survey and commented on the draft manuscript for publication.

Neighbour support spanned all adult age groups, including older people categorised as being at-risk to the virus.

Respondents reported providing a wide range of support during the early stage of COVID-19 lockdown that went beyond health information, food and medical prescription assistance, to include raising morale through humour, creativity and acts of kindness and solidarity. This informal neighbour support was more expansive and likely to have been organised more rapidly than the services available through formal voluntary channels such as the NHS Volunteer Responders scheme.

The findings show that survey respondents used a wide variety of approaches to communicate with neighbours, and made greater efforts to contact vulnerable groups. A majority of respondents made use of social media platforms which enabled them to become involved in extended networks, which met a variety of neighbourhood needs. One respondent described both practical support and new connections which had been established through a social media platform post-lockdown:

“…A huge camaraderie and outpouring of generosity. Shared ‘shops’ have been a great help whilst self-isolating. We are introducing ourselves to each other with some family and historical background on WhatsApp. We plan to hold a street party at the end of all this.”

With respect to most measures, there were no differences in the characteristics of support between respondents in areas of higher and lower deprivation. However, respondents from more deprived areas were more likely to report that they were involved in supporting certain vulnerable groups, including:

As with previous research on major social upheavals, our findings suggest that responses to the viral pandemic and associated social restrictions may increase existing social and health inequalities. One respondent described their understanding of the challenge of reaching the most vulnerable in the context of neighbourhood support:

“I personally think that the core function of providing support to the vulnerable can get swamped by the general effort to provide community support/morale (although very laudable and positive in its own right).”

The ‘Apart but not Alone’ research team are conducting qualitative research and a follow-up survey to explore in more detail how neighbourhood responses to the pandemic have evolved over the extended lockdown period and following the easing of lockdown restrictions, and what this might mean for future support initiatives. 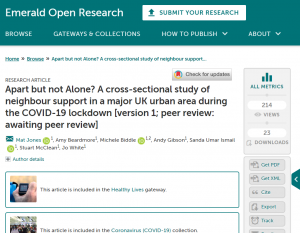 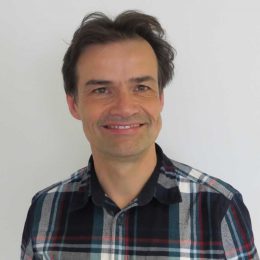 University of the West of England (UWE Bristol)

UWE Bristol is one of Britain's largest universities with a consistent reputation for high graduate employment, quality in teaching and growth in research. It is at the heart of dynamic partnerships that deliver real impact in the world. UWE hosts the Bristol Robotics Laboratory, the largest academic centre for multi-disciplinary robotics research in the UK.