Understanding how COVID-19 impacted on people who use drugs

When the COVID-19 pandemic hit the UK in early 2020, there was concern about its impact on vulnerable groups in society. In this blog, Jo Kesten, Research Fellow at NIHR ARC West and Catriona Matheson, Professor at the University of Stirling and Chair of the Ministerial Drug Death Task Force for Scotland, discuss the findings and wider policy implications of two independent research projects to investigate how people who inject drugs were affected. Both studies interviewed people who use drugs in the first national lockdown in 2020 to understand how the pandemic impacted on them. In Scotland, data from online forums, surveys and the police were also used to examine changes in the drugs market. Find out more about Catriona’s project and the ARC West project.

What were the main findings from your study?

Catriona: First, we found that people didn’t seem to be at increased risk of contracting COVID. We think that was because people were generally isolated and seeing few people already. From the survey work, just under half had not changed their methods of purchasing drugs at all. But 18% used online methods more regularly than previously, and the rest were at the mercy of what they could access from street sellers. People talked about having to travel a bit further than before or meet people that they didn’t know which has increased risks.

Second, police data showed an initial dip in drug markets but that lasted just a few weeks. Quite quickly, those markets re-established in a different form with new people coming into different areas. There was increased competition and demand so that maybe made the dealers more pushy, more aggressive and they were trying to protect their positions more. It was a slightly more volatile situation, but the supplies were there, though there was some change in terms of the perceived quality of drugs. The other thing is that there were more benzodiazepine’s around because they’re cheap.

Jo: We found similar things with people saying the drug quality had reduced. And we heard reports of people switching to spice for a cheaper alternative if it was more difficult to come across heroin. People struggled financially to afford drugs and a couple of people reported getting into debt with dealers and struggling in that way.

Catriona: Obviously, people missed their face-to-face contact with services. For some it suited them, but quite a lot of people missed these contacts, particularly as the pandemic went on. Services made efforts to increase access to needle exchange facilities which was appreciated by people. We came across some really good examples of outreach and people being started on scripts rapidly.

People weren’t getting access to their general health care, which of course was the same for everybody. But it did make a difference for things like dental health for example, which is always a tricky one for people with drug issues, there’s quite a lot of dental pain. We found a description of people managing this pain by upping their drug use.

Jo: Interestingly we didn’t have anyone talk about dental health, but that makes a lot of sense. We also found several people were isolated already and the pandemic led to a sense of loss, loss of connection, loss of social support from not being able to see friends and family and a couple of women described deciding not to see their family and their children to protect them.

There were examples of people trying to reduce the risks of passing COVID and trying to follow the public health advice, but also people really struggling to do that if they lived in crowded hostels. People also talked about not being able to follow the social distance guidance with dealers. I think we were also expecting there to be more infections in this group and that didn’t seem to be the case in our sample.

In terms of the sense of support people really appreciated the efforts made by services to continue operating during the pandemic. People also appreciated less frequent drug treatment medication collections and reduced supervised consumption, citing reduced stigma, more freedom and less exposure to other people who use drugs.

Catriona: There were certainly people who found that quite positive in our study and were very clear that they were able to control their dose and some also described reducing the dose and using that as an opportunity to really take back some control. But there were others who missed the collections and felt it was quite risky for them. They felt they didn’t trust themselves to manage it. There were also people describing taking more than their daily dose. Service providers were trying to risk assess but they had to act quickly, and the system wasn’t always responsive to changing those decisions.

In recent Scottish drug-related death data there has been more methadone involved so we’re trying to unpick why that was. I think there’s more understanding needed to get a full picture of what was going on.

Did any of the findings surprise you?

Catriona: Apart from the lower number of COVID infections, I think the emerging finding that we hadn’t really thought about was the digital component. This work really highlighted for me the importance of access to a phone and the internet as a link to services. Whether it’s speaking to their counsellor, linking into recovery groups or being able to find out information about where to get support.

Jo: I agree. There’s a move now towards health care being provided, at least initially, through a telephone or online consultation. If that’s to continue, we need to be really mindful of digital inclusion. These projects highlight how cut off some people are without access to technology.

Catriona: Yes, it really exacerbates the isolation people face. And it’s not just in relation to service access and information, it’s also contact with family and friends.

What changes would you like to see as a result of your research in policy and practice?

Catriona: I think a good thing to come out of all this will be more initiatives to improve digital inclusion, making sure people have the capacity and not just in terms of devices and data, but also training and understanding of how to connect with services, how to get information.

What we have learned is that innovation in outreach services can be done and it can be done quickly. I’d like to see more of that and more shared learning so that it can be done in other places to reach the most vulnerable people and try to engage them and bring them into some form of treatment or support.

I would really like to see more emphasis on mental health in terms of supporting people who are suffering from isolation and trauma which has a big impact. People have been isolating themselves with no face-to-face contact with anyone, not just services, and it’s taking its toll.

Jo: We’ve got very similar hopes in terms of learning from the innovative approaches used in the pandemic. We want our research to form part of a broader conversation about the policy around drug treatment medication. It feels like now is the time to generate more of a conversation around this issue and gather more evidence rather than simply reverting to pre-COVID ways.

The issue around digital exclusion is also key, where remote contact is not going to work for someone, ensuring that the option for face-to-face contact is there and thinking about ways of working innovatively and having a joined-up approach among local service providers will be important to address mental health issues alongside housing. We know from recent research the importance of addressing homelessness and housing for the health of this population including HIV and Hepatitis C transmission.

Who are the people who can make this happen and how can you engage with them?

Catriona: It would be great to create a network of shared learning across homeless, outreach, harm reduction and prescribing services to encourage innovation. We’ve already got a drive in Scotland to make sure people have access to treatment much more quickly as part of our new Medication Assisted Treatment standards, but this backs up the need for it. That’s quite a big ask because our services are really struggling, they’re all understaffed and they’re up against it. That means we also need to work with governments and our alcohol and drug partnerships in Scotland.

Jo: It’s about conversations, isn’t it? Sharing what we’ve learned and sharing between service providers. It can be hard to have conversations with people who influence government though. Do you have any tips on that, Catriona?

Catriona: Yes, you’ve got to get in with the people who have that influence, are responsive and know the issues. If you get to people like that who are in positions where they are regularly meeting ministers and they are having those conversations, then you can make sure they’re aware of the relevant research.

Jo: And it seems it’s about timing as well. The fact that we’ve just had the Dame Carol Black Review should mean people are receptive and open to doing things differently.

Catriona: Academics can be too polite and assume civil servants will read their academic paper, which is very unlikely, I think a kind of academic evidence lobbying is needed.

LUCID-B was funded by the Elizabeth Blackwell Institute Rapid Response COVID-19 scheme and supported by the National Institute for Health Research, Applied Research Collaboration West (NIHR ARC West) and NIHR Health Protection Research Unit (HPRU) in Behavioural Science and Evaluation. The views expressed in this blog are those of the authors and not necessarily those of the NIHR, the Department of Health and Social Care, Public Health England, the Wellcome Trust or the Elizabeth Blackwell Institute. 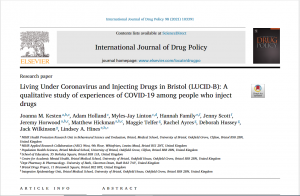 Living Under Coronavirus and Injecting Drugs in Bristol (LUCID-B): A qualitative study of experiences of COVID-19 among people who inject drugs

People who inject drugs are considered at high-risk of getting COVID-19, and of having a more severe infection if they do get it. Services for…