Patients taking anti-clotting medications after having problems with their heart are more likely to stick to the treatment if they understand the side effects well and know how and where to access advice and information, an NIHR ARC West study has found.

Many people who have had problems with their heart are prescribed medications to prevent blood clots forming in their arteries. These medications are called dual antiplatelet therapy (DAPT) and include aspirin and an additional anticlotting agent. They need to be taken for up to a year.

DAPT medications increase the risk of bleeding, including “nuisance bleeding” such as nosebleeds, bleeding from the gums, or excessive bruising.

This project looked at the experiences of people who had been prescribed DAPT, to understand how they might respond when they experience bleeding because of their medication. It is part of the ADAPTT study, a bigger investigation looking into DAPT prescribing and bleeding.

The aim of the project was to understand people’s experiences of taking DAPT to prevent blood clots. It explored whether patients have experienced any side effects and whether they have taken any action as a result. This could include stopping taking their medicine or seeking advice from healthcare professionals.

Ten out of 21 individuals taking part had experienced nuisance bleeding. Most were aware that this was caused by DAPT medication. Participants were not alarmed by the risk of bleeding and believed taking their medication was important despite the side effects.

Access to information, for both patients and their families, was an important theme that emerged from the discussions. Several participants described how family members supported them by reminding them to take their medicine or by looking for information on their behalf.

Many participants found it difficult to take part in conversations about their medicine during their stay in hospital, and realised they had questions and concerns after they went home. They described the challenges in getting the information they needed once they had left hospital. It wasn’t always easy to find information, and not all participants felt confident about how to get answers to their concerns, especially about taking several medicines at the same time.

“This study shows how important it is to help patients understand why they need to take medication and the potential implications of taking it, such as side effects. Good medication information can support people in taking it correctly for the right amount of time. 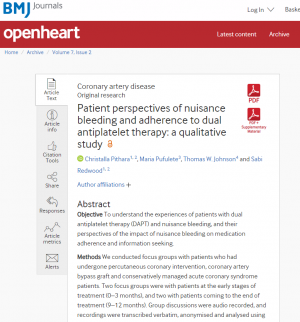 Many people who have had problems with their heart are prescribed medicine to prevent blood clots forming in their arteries. This is called dual antiplatelet… 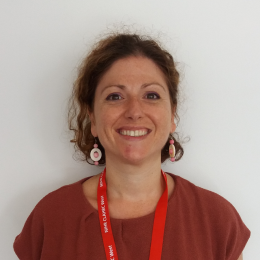