The human papillomavirus (HPV) vaccination programme, previously delivered to young women only in schools in England, aims to prevent HPV-related diseases, including cervical cancer. Since it began in 2008, high coverage has been achieved amongst young people eligible for the vaccine, with over 10 million receiving immunisation against HPV. However, there are pockets of lower uptake among some populations – such as minority ethnic groups and those not educated in mainstream schools .

One barrier to young women being vaccinated is the requirement for written parental consent. In England, the legal framework allows young people to be vaccinated without parental consent provided they are deemed to have the maturity to make their own decisions and to understand the implications of those decisions. However, a previous study showed that adolescent self-consent was not widely used.

New consent procedures were introduced in 2017/2018 in two local authorities in the south-west of England because of concerns about low uptake rates. The new procedures started with a request for written parental consent, but also included contacting parents to ask for verbal consent, and the opportunity for adolescent self-consent if parents could not be contacted.

The study team at the University of Bristol, Sirona Care and Health, Public Health England and University Hospitals Bristol & Weston NHS Foundation Trust, undertook a mixed-methods study to explore the impact on uptake and acceptability of the new consent procedures. The research was led by Drs Suzanne Audrey and Harriet Fisher from the NIHR Health Protection Research Unit in Behavioural Science and Evaluation at the University of Bristol.

The study compared HPV vaccination uptake in intervention sites – where the new procedures were implemented – with other sites in England. Uptake in one of the local authorities increased from 76.3 per cent in 2017/18 to 82.5 per cent in 2018/19. Further analysis showed the effect was 11.5 per cent when compared with local authorities which had similar characteristics, but were not implementing the intervention, because on average their uptake decreased over the same period. But the study did not find evidence for change in uptake in the other local authority.

The study also carried out an analysis to compare uptake of the HPV vaccination programme within the intervention local authorities by ethnicity, type of school and level of deprivation. However, no evidence was found for a difference ‘before’ and ‘after’ the consent procedures were implemented.

Overall, there was some evidence that implementing the new consent procedures can improve uptake, and overcome trends for decreasing uptake, of the HPV vaccine. However, there is a need to find a way to address inequalities in uptake, which is of concern because of the disproportionate effect of HPV-related cancers among minority ethnic and more deprived groups.

When the study was carried out, young women were offered the HPV vaccination in Year 8, when they were between 12 and 13 years old. It was difficult for respondents to decide whether this age is the right time to self-consent because of perceived differences in the maturity of Year 8 students. One parent said: “Some 13-year olds can make really sensible decisions, and others you can’t trust them to go to the shop.”

The potential for new consent procedures to highlight the right to refuse vaccination was also a concern. One young woman said: “I don’t think we’re allowed to make the decision completely by ourselves, and I don’t think we should either because most kids will go ‘Oh, it’s a needle, I’ll go out of it, I won’t do it’ but it’s actually quite important.”

There were also concerns about the impact of self-consent on relationships within families and between professionals and the families they serve. One school staff member at an alternative education provider said: “I suppose ultimately parental relationships are really important to us… I would hate to drive a wedge in between us and the family.”

Getting consent from parents by phone was appreciated by the immunisation nurses, parents, and young women in the study. Self-consent among adolescents was rare. It’s important to understand and address the barriers to uptake outside of mainstream school-based immunisation sessions, to tackle inequalities in uptake.

The study highlighted unresolved issues in relation to adolescent self-consent for the HPV vaccination programme, and potentially other vaccines and healthcare initiatives for young people. These issues include public and professional perceptions of young people’s rights and abilities to take responsibility for decisions affecting their health. 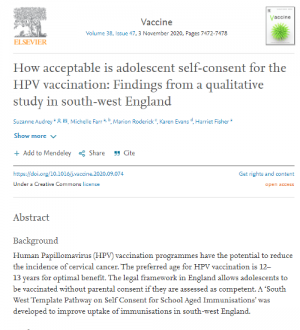 How acceptable is adolescent self-consent for the HPV vaccination: Findings from a qualitative study in south-west England 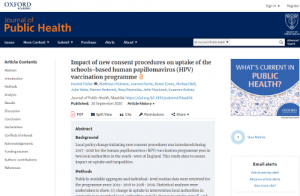 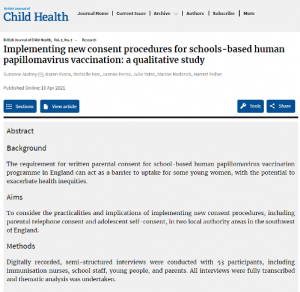 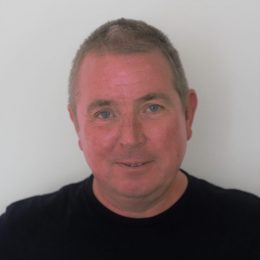