Interventions for children exposed to domestic violence: an evidence synthesis

Children who are exposed to domestic violence and abuse (DVA) are more likely to experience emotional and behavioural problems during their childhood, adolescence and adulthood.

There are support programmes that try to prevent or reduce the damage to children that domestic violence and abuse causes. But there isn’t much research on whether they make a difference. It’s not clear whether this type of support is helpful or well-received. We also don’t know if it is good value for money.

Our evidence synthesis looked at all the available evidence on these programmes, both in the UK and internationally.

From this work we recommend that services should be measured against what children, parents, service providers and policy-makers find important. New research should look at which programmes are effective and well-received by different groups of people. We also identified three types of programme that should be prioritised for further evaluation in the UK.

We concluded that there should be more UK-based research to understand which programmes work and which don’t.

This project is a collaboration between NIHR CLAHRC West and CLAHRC East of England, and the Universities of Bristol, Central Lancashire and Macmaster in Canada. It is also known as ‘IMPRoving Outcomes for children exposed to domestic ViolencE’ (IMPROVE).

This ‘evidence synthesis’ aimed to look at all the evidence available on this subject. It was made up of several linked studies, including:

Here we focus on the work done by CLAHRC researchers. Download the full report for details of all the studies conducted as part of IMPROVE.

The systematic review looking at interventions

We found 13 trials that tested an intervention programme for children growing up with domestic violence in the home. None were from the UK. Most were in the US, with one each in the Netherlands, Canada and Israel.

Trials most often looked at psychotherapy and psychoeducation interventions delivered to the non-abusive parent, mostly the mother, and children. No trials evaluated programmes that included the abusive parent, or lower-intensity interventions, such as self-help.

Programmes were most often offered based on children’s exposure to domestic violence and abuse, rather than on their individual clinical or social needs. The duration of programmes and format varied, offered on a group, individual or parent and child basis, or a mixture of these. Most programmes were for pre- to middle-school-age children. They were mostly delivered in specialist or community-based settings, by graduates with expertise in mental health disciplines.

What were the problems with the studies we found?

Eleven of the 13 trials reported modest behaviour or mental health improvements. But these studies all had a high or unclear risk of being biased, which reduces our confidence in the results.

The studies differed in:

The lack of repetition and the high risk of bias of the studies mean our conclusions about their effectiveness aren’t certain, particularly if we try to compare one type of programme with another.

This part of our project looked at:

We found that children and parents found group-based psychoeducational interventions for children and non-abusive parents acceptable. Some of the benefits they saw came from the group process and the therapeutic content. However, particular elements of this type of intervention, including safety planning and sexual abuse prevention, were a problem for some children and parents.

We can’t be sure of what format of support is most suitable for older children and teenagers. We also aren’t certain how different factors, such as readiness to engage in a therapeutic intervention or ethnicity, might influence what’s acceptable.

Psychoeducational interventions also seem to be acceptable to the people delivering services, as well as feasible to set up. Although the success and sustainability of this intervention may depend on the broader community response to domestic violence and abuse, as well as the stability and culture of the organisation hosting it.

More research is needed on how acceptable and feasible interventions are in different settings. Important questions also remain on when it may be appropriate to offer psychoeducational interventions that include the abusive parent. There is an increasing focus on whole family interventions in the UK, so this should be given attention in the absence of evidence of effectiveness.

We found limited evidence of the acceptability of other types of interventions.

UK evidence base and services

It is striking that there were no UK-based trials and very little ‘qualitative’ research on this topic, where people’s views are collected and analysed. But it was heartening to see a culture of service evaluation emerging in the domestic violence and abuse sector. For example, we found 21 evaluations of 19 different programmes.

More studies are needed, but there’s a case for looking at ways to maximise the quality of service evaluation and the information that’s routinely produced for service monitoring.

The UK response to children exposed to domestic violence and abuse mostly consists of group-based psychoeducational interventions delivered either to the child alone or to the child and their non-abusive parent in parallel. We identified this type of intervention as promising. Parenting skills training plus advocacy, the other promising intervention that we identified, is not currently used.

Our review of the UK grey literature and consultations with professionals indicate that the response to these children is largely led by the specialist domestic violence and abuse sector.

Our consultations with young people, parents and professionals suggest that though reducing symptoms is a key benefit of treatment, things like school attainment, the ability to cope with challenges, self-expression and self-regulation, a sense of well-being and improvements in the quality of important relationships are also important to them.

It’s time to agree a core set of outcomes for the field, informed by stakeholders and including negative or adverse effects. This would ensure that trials consider effectiveness against outcomes that are relevant and important to stakeholders. It would also help to synthesise findings across trials.

There is an urgent need for more high-quality studies, particularly trials that are designed to produce actionable findings that can be implemented in real-world settings and inform decisions about which interventions to commission and scale.

Our research recommendations are: 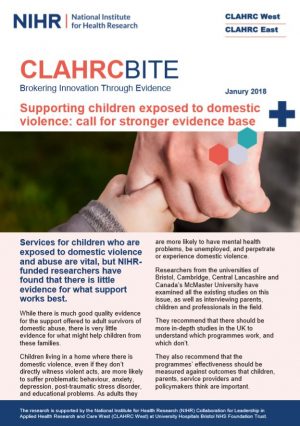 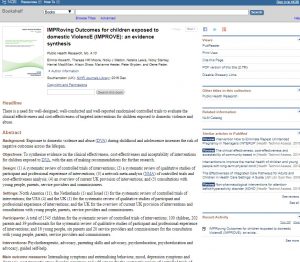 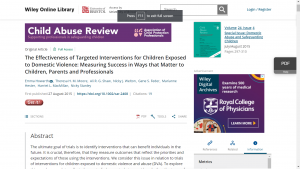 The Effectiveness of Targeted Interventions for Children Exposed to Domestic Violence: Measuring Success in Ways that Matter to Children, Parents and Professionals 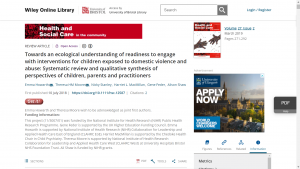 Towards an ecological understanding of readiness to engage with interventions for children exposed to domestic violence and abuse: Systematic review and qualitative synthesis of perspectives of children, parents and practitioners