Interventions to reduce the effects of financial hardship on depression and anxiety: systematic review

Economic recession leads to more unemployment, debt, depression and suicide. Our systematic review found that job clubs appear to be effective in reducing depression in people who lose their jobs, particularly those at high risk of depression. Evidence for other forms of support is limited.

Our aim was to review the research evidence from randomised controlled trials, or RCTs, on this topic. RCTs are the best sort of study to determine effectiveness. We looked at studies of interventions to offset the impact of job loss or economic hardship and debt on mental health.

Our systematic review will help national policy makers, councils and health care providers to develop strategies to reduce anxiety and depression, as well as decrease suicides in people affected by recessions.

We looked for studies where some kind of support or help was given to people in this situation. The help could be advice on managing debt, applying for jobs, going for interviews, or knowing which benefits to claim, or therapies such as cognitive behavioural therapy. We were interested in what other types of help people were being offered.

The way we assessed the effects was to see how anxiety or depression changed for people given the help, compared to those who weren’t.

We found 11 randomised controlled trials that looked at interventions in general population samples that were relevant and so were included in our review.

People who received job club interventions reported lower depression scores than people who didn’t receive it, but they weren’t very much lower. The reduction was seen most clearly in those who were identified at the start of the trial as being at high risk of depression, but who didn’t have a formal diagnosis of depression.

We found two RCTs that gave cognitive behavioural therapy, or CBT, to unemployed people in groups. In one trial CBT was given every week for seven weeks and those who received it reported reduced symptoms of depression at three months. The second reported that CBT had no effect, but they gave the therapy for just two afternoons.

We found one trial of debt advice where people were given free telephone access to comprehensive debt advice, including help with county court judgements and bailiffs. This study was stopped early because not enough people wanted to take part, and many people who took part did not take up their offer of telephone debt advice, so they never actually received any.

This was a large trial, enrolling more than 400 people, but no evidence of benefit was found. Single RCTs of four other interventions showed no evidence of any benefit. Most of the studies were published before 2000 and so quite old, and few were from the UK.

Evidence that job club, CBT or debt advice interventions work is very limited. More research is needed to identify the best approach to support people who lose their jobs or experience financial hardship.

Researchers at the University of Bristol are carrying out a small pilot study, funded by NIHR, called HOPE: Help for people with money, employment or benefit problems.

HOPE is a pilot randomised controlled trial of a support service for people who have self-harmed or are distressed, and report financial, employment, benefits or housing problems as contributing to their mental health. The service gives these people a ‘navigator’ who helps them through support such as assessing their mental health needs, checking benefit entitlements and guiding to appropriate services. 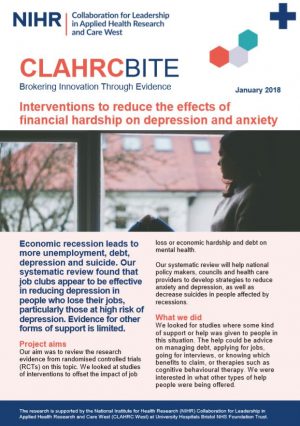 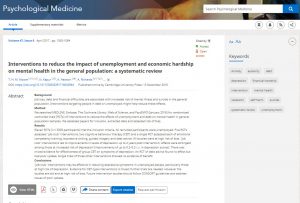 Interventions to reduce the impact of unemployment and economic hardship on mental health in the general population: a systematic review

This project was a stepping stone to the HOPE intervention. 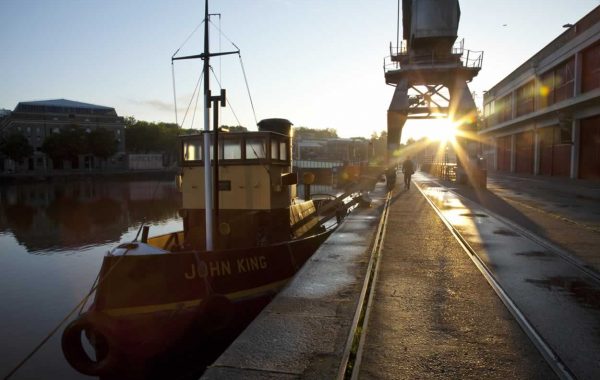 Evaluating HOPE, a project to reduce suicide in the Bristol area