Rapid tests to distinguish bacterial from viral infections: a review of the evidence

Bacteria and viruses can both cause respiratory tract infections and it’s often impossible to tell whether someone has a viral or bacterial infection from their symptoms alone. As a precaution, clinicians often prescribe antibiotics if they aren’t sure. This is a problem because antibiotics do not help against viral infections and overuse can lead to antibiotic resistance. It is very important that antibiotics are only used when absolutely necessary.

Clinicians need rapid tests to decide whether to prescribe antibiotics, because the traditional tests are slow and give results too late. There are two rapid tests currently in use: one measures the biomarker C-reactive protein (CRP) and the second procalcitonin (PCT). The level of these biomarkers in the blood increases during an infection. They are often higher during a bacterial infection than a viral infection, which is how they are used to tell the difference. However, these tests are not very reliable and often get it wrong.

Combining several different biomarkers in one test may give more reliable results.

We reviewed research on new rapid tests that could help GPs and hospital clinicians decide whether to prescribe antibiotics. We included research on tests both in development and already on the market, that combined two or more biomarkers. We estimated the accuracy of these tests where possible.

This project was led by Henry Carlton, a University of Bristol Medical School undergraduate student, supervised by Martha Elwenspoek and Jelena Savović of NIHR ARC West.

We found 20 studies that met our criteria. They described 15 different tests that identified bacterial infections and nine different tests for viral infection. However, 18 of these studies had methodological problems, which may have affected their results.

The accuracy of all the tests varied. Many were similarly or no more effective than existing single-biomarker tests, but some showed the potential to be used in healthcare. We identified two already commercially available tests, ImmunoXpert and FebriDx, that were able to differentiate between patients with bacterial infections and patients with viral infections.

The ImmunoXpert test combines three biomarker measures to identify bacterial or viral infections, providing results in 100 minutes. A 25-minute version of this test is being produced, but there have not been any studies measuring this version’s accuracy yet.

The FebriDx test combines two measures and is able to turnaround results in 25 minutes.

ImmunoXpert (five studies) and FebriDx (five studies) were the only two tests to have been repeated in more than one study. This meant we were able to pool the results for each test and estimate how accurate they are.

We found both tests to be more accurate for both bacterial and viral infections than those measuring single biomarkers of CRP and PCT. We modelled their potential use in GP and hospital settings, which showed both tests reduced the number of patients prescribed antibiotics for viral infections and the number of patients not receiving antibiotics for bacterial infections, compared with using single biomarker tests.

From this research, we have been able to highlight a variety of biomarker combinations that can tell bacterial from viral infections. The FebriDx and ImmunoXpert tests show a lot of potential and could reduce unnecessary antibiotic prescription. However, the methodological problems with many of the studies means that these findings should be interpreted with caution. 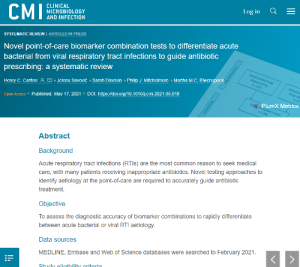 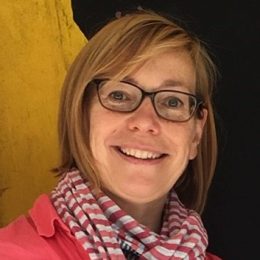