Drug use in street sex workers: the DUSSK study

Many female street sex workers in the UK are addicted to illegal drugs, such as heroin and crack cocaine. For most of these women, drug use reinforces their dependency on sex work, trapping them in a ‘work-score-use’ cycle, adding to their health and social problems.

The need to finance their drug use, and often that of a partner, underpins their involvement in sex work. Drug intoxication also means they are less able to protect themselves whilst working.

Reducing illegal drug use will improve the health and safety of this vulnerable group of women, but managing drug use amongst sex workers is complex. Many have experienced multiple traumas, including abuse and violence from a young age, which they continue to experience through their involvement in street sex work. Such experiences often lead to post-traumatic stress disorder (PTSD) and when these women reduce their drug use, the symptoms of their trauma tend to worsen.

On top of this, sex workers who are drug-dependent find using drug treatment services difficult. They can experience stigma in treatment groups from other service users, which stops them discussing their sex work despite it being a major factor in their drug use.

This combination of trauma and stigma means they typically don’t benefit as much from treatment services. We developed a plan to specifically target the stigma and trauma in sex workers’ drug treatment, to improve their results.

We collaborated with One25 (a charity supporting women selling sex on the street), Developing Health and Independence (DHI) – an organisation providing substance misuse services – and Avon and Wiltshire Mental Health Partnership NHS Trust (AWP) to improve drug treatment for these women.

To avoid stigma, we offered a female staffed street sex worker-only drug treatment group in a sex worker only environment (One25) instead of usual drug service settings. Trauma was addressed by referring women to AWP for PTSD screening once their drug use was more stabilised. If they were diagnosed with PTSD, they were offered treatment for this as well.

We needed to find out if it was feasible to provide this new service and whether we would be able to do research to test if it worked.  We also wanted to know what street sex workers and the staff providing the service thought of it and wanted to get a rough idea of how much it would cost the NHS to provide it.

To understand whether the research could work, we monitored if the street sex workers were prepared to take part in the study and if they did, how long for. We also monitored how often they took part in the groups and trauma treatment to understand how easy it would be to deliver this service, as well as collecting information on costs. We carried out in-depth interviews with the women using the service, as well as the organisations providing it to understand what they thought of it and how it could be improved.

We also wanted the research and service to be guided by women with experience of drug use and street sex work. We sought their opinions at each stage and came up with solutions to problems which arose.

Eleven women took part and four attended enough groups to be screened for PTSD. They were all diagnosed with PTSD and so took part in the trauma therapy phase of treatment. The women’s attendance at drug groups and trauma sessions was a bit patchy but this was mainly to do with the issues the service sought to address – problematic drug use, sex work, and poor mental health – rather than the service itself.

Participants and service providers mostly found the research study and the service was a positive experience, especially the street sex worker-only environment. When the women disclosed their traumatic experiences, this was challenging for drug group facilitators and non-clinical staff who didn’t have experience of managing trauma. These staff would need more support if the new service continued.

The study reveals how necessary trauma treatment is for street sex workers, although it is not usually readily available to them. All four of the participants were diagnosed with PTSD. The severity of the trauma the women disclosed was unexpectedly challenging for non-clinical service providers.

During the study we found that some changes to the service needed to be made. For example, giving more trauma stabilisation sessions before PTSD treatment, as the impact of drug use and sex working on the women’s lives made them less ready to cope with trauma treatment.

Although the three service providers found the new service valuable and were able to work together effectively, they suggested closer working would improve delivery.

The total cost of the service was £11,710, but costs were driven up by low attendance. Pressures on staff and service providers having to reapply to provide drug services during the study also increased the length and cost of the intervention period.

Though costs may appear high, they may be justified if future research demonstrates the service works and street sex workers reduce their drug use. This could lead to them using health services and the criminal justice system less, and reduce the impact of criminal and anti-social activity on wider society.

The DUSSK study provided useful insights to guide development of future services and research studies. This is an important area to continue researching so here are our recommendations: 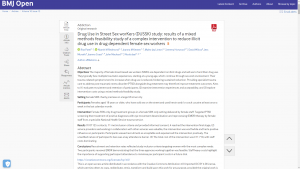 Drug Use in Street Sex worKers (DUSSK) study: results of a mixed methods feasibility study of a complex intervention to reduce illicit drug use in drug dependent female sex workers