Prostate cancer is one of the most common types of cancer. It is usually diagnosed using a biopsy guided by ultrasound. A biopsy is where samples are taken from the prostate with a needle. Biopsies are unpleasant, can cause considerable side effects and don’t always pick up cancer or identify the severity of a cancer when it is present.

If biopsies could be targeted better, men who are being checked for prostate cancer wouldn’t have to undergo so many and there would be less risk of getting a misleading result. MRI scans are sometimes used before doing a biopsy to help diagnose prostate cancer, and while this approach is now being recommended by the UK National Institute for Clinical Excellence (NICE) their use isn’t widespread in some countries.

If an MRI scan identifies possible cancer, it can be used to target specific areas with a biopsy. If the MRI doesn’t find any cancer, a biopsy can be avoided. This could reduce the number of biopsies for some men, as well as the risk of side effects and unreliable results.

We reviewed the research that compares the standard procedure with using pre-biopsy MRI scans, to find out if an MRI scan followed by a targeted biopsy is better at detecting prostate cancer than the standard biopsy alone. We only included studies that looked at patients who had never had a prostate biopsy before.

We also looked at the differences in the severity of the cancers diagnosed by the two approaches, and whether using MRI leads to fewer biopsies and complications.

We found seven studies to include in our review, which covered a total of 2,582 patients.

Our review found that the use of pre-biopsy MRI combined with targeted prostate biopsy was better than a biopsy alone in detecting cancers that are likely to need treatment, despite the differences between the seven individual studies. Using pre-biopsy MRI led to fewer biopsy cores being taken per procedure, which in turn reduced side effects, and may potentially lead to avoiding unnecessary biopsies for some men.

By combining the study findings, we found that an MRI scan followed by a targeted biopsy was 57 per cent better at detecting high risk prostate cancer that needs treatment than the standard biopsy, with the effect in individual studies ranging from 2 per cent to 141 per cent better.

We also found that 77 per cent fewer biopsy cores were taken during a targeted biopsy, varying from 2-12 cores per procedure, compared to the standard biopsy procedure where 12-14 cores are usually taken. The MRI scan found no signs of cancer in one in three patients, so using an MRI scan could avoid performing possibly unnecessary biopsies in a third of patients.

Only one study reported biopsy side effects. It found fewer side effects in patients that underwent an MRI scan and targeted biopsy, compared to patients that underwent the standard biopsy. This could be because fewer patients needed a biopsy as a result of having no signs of cancer on the MRI scan. But it could also be because MRI-guided biopsies are sometimes performed differently, where the needle goes through the perineum instead of the wall of the rectum.

These findings support the use of MRI and a targeted biopsy to diagnose prostate cancer, for men who are suspected of having prostate cancer but have never undergone a prostate biopsy before. 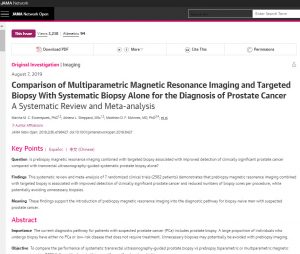