Some homeless people are heavy drinkers with poor diets. This can mean they are at risk of developing diseases associated with both a high alcohol intake and malnutrition.

Malnutrition as a result of alcohol dependency can lead to brain damage and other conditions. Malnutrition is often only considered to be a problem for very thin people. But heavy drinkers can be overweight and malnourished because alcohol contains a lot of calories but doesn’t contain important nutrients. It can also damage the stomach or gut, reducing the body’s ability to absorb nutrients from food.

Figure 1 How alcohol and homelessness lead to illness

Advice on preventing malnutrition is often unsuitable for homeless people, who have limited access to cooking facilities and little money. To find the best way to tackle this problem, we reviewed the findings of research studies on this topic.

This project aims to identify the best approach to prevent and treat alcohol-related malnutrition in people who are homeless, or at risk of becoming homeless. Our ‘systematic review’ helps identify effective measures for preventing or reversing micronutrient deficiencies in this group of people.

We did a thorough search for research published by November 2016 involving homeless drinkers, in two connected reviews:

We assessed the quality of the research we found, collating them to inform effective treatment decision-making.

The idea for the project was brought to CLAHRC West by people who have worked with homeless problem drinkers in Bristol for several years. Clare Fleming is a clinician at Compass Health, and Katie Porter was Alcohol Strategy Manager at Bristol City Council.

Professor Adrian Bonner, University of Stirling, is an expert on alcohol addiction and nutrition and has worked with charities including the Salvation Army. He advised on the relationship between alcohol and nutrition in homeless drinkers.

As this was a systematic review of existing research, members of the homeless community were not directly involved in this project.

The first review looking at the range and level of deficiency found very few studies that have looked at nutrient deficiencies in homeless people who drink heavily.

The limited evidence shows that there are deficiencies, including vitamin B1 and many other micronutrients, at varying levels across this population that haven’t been studied in enough detail. So we need further research to identify all potentially harmful deficiencies, what nutrients are needed and who needs them. This would help ensure that those needs are met.

The second review looking at effective treatments found 25 different types of treatments for reducing malnutrition. Some of these were about educating the homeless people on better eating and drinking less, while others provided them with food or gave them vitamin supplements. Sometimes education was given in combination with food or another treatment such as detox. Overall, it appeared that provision of food, or supplements, either alone or in combination with other treatments were usually acceptable and effective in improving nutrition levels. It also appeared that involving participants in setting up interventions would lead to good uptake.

We are looking for support for a new study to: 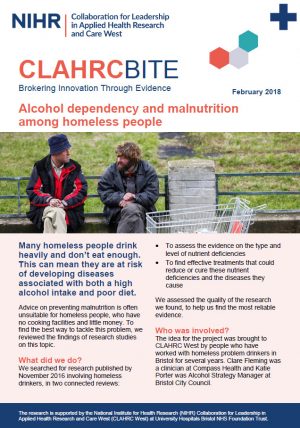 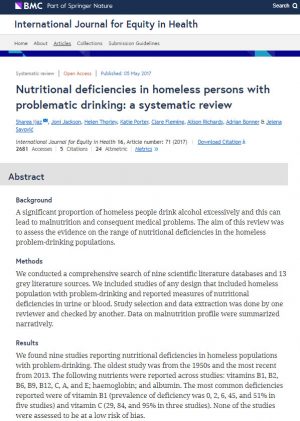 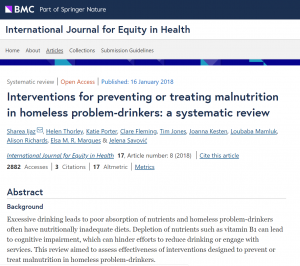 Interventions for preventing or treating malnutrition in homeless problem-drinkers: a systematic review